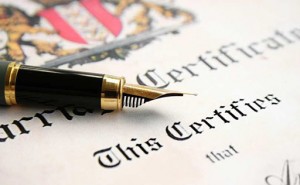 As part of the immigration process, the Department of State requires police records to confirm that the immigrant does not have any past criminal charges that may make them inadmissible into the United States. Police certificates may create problems for the intending immigrant because the issues of dealing with a foreign government.

If the immigrant has resided in multiple countries over their lives, obtaining police certificates can create a logistical problem for them. Most countries require applicants to apply in person for a police certificate at a local office. The immigrant can ask the consular officer to waive the requirement if there is undue hardship and substitute with evidence of good conduct.

Evidence of good conduct can be proof of membership in or affiliation with a reputable religious organization, personal statements from outside parties, and proof of good deeds from third party organizations. If there was a police or criminal record which might exist in the foreign country, immigrant is required to obtain the police certificate or present evidence that it is unobtainable. The consular officer will make a determination on whether to grant the waiver based on available evidence.

Myanmar:
During the years 1942-1945, Burma was devastated by nearly continuous fighting. Almost every part of the country suffered heavy damage, often repeatedly. As a result, almost no civil records predate 1945. Police certificates can be obtained from the Township police station having jurisdiction over an applicant’s most recent place of residence in Burma. For persons residing overseas, the most practical way to obtain the certificate is through close relatives still in Burma.

Vietnam:
Vietnam has no centralized national system for vital records. Many records have been lost through war and inconsistent record keeping, but larger cities may have old documents on file, and records from the north are generally available. Registrars will sometimes certify that certain documents were lost or destroyed.

For Police Records, there are two processes for obtaining Police Records. Those currently in Vietnam have to apply at the Department of Justice located in the district where the applicant currently resides or at the applicant’s official residence. For those who no longer reside in Vietnam, an application must be made to the National Center of Criminal Records – Vietnamese Ministry of Justice in Hanoi.

Laos:
There are no central registries of vital records in Laos. There are no standard forms for any civil record other than the Household Registry Book and national Identification Card. Documents can be obtained only by those applying in person and resident in Laos, and occasionally by family members applying in person.

Criminal Records are issued by the President of the People’s Court of the particular Province (or the Vientiane Municipality) in which the applicant resides. Documents regarding events that took place before 1975 are unavailable.

Cambodia:
Because all archives were destroyed during the regime of 1975 – 1979, and because Cambodia has had some difficulty reestablishing its civic institutions, contemporary and retrospective civil documents are now issued by local authorities for a fee using information provided by the requester. In Cambodia, the police certificate is issued by the Ministry of Justice in Phnom Penh.

Malaysia:
Both Malaysians and non-Malaysians who reside in Malaysia for a period of more than one year may apply for a Malaysian certificate of good conduct at the Ministry of Foreign Affairs at Selangor. Applicants currently residing outside of Malaysia should contact the nearest Malaysian embassy or consulate in their country of current residence.

Indonesia:
Unavailable for applicants inside and outside Indonesia. Indonesian police certificates require initial processing at a local or village level, which is nonstandard in nature, can be subject to capricious decisions by officials and may require nonofficial payments to proceed further.”